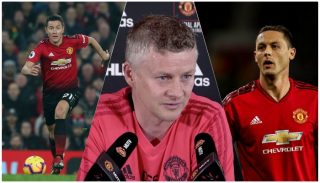 Ole Gunnar Solskjaer said there are no fresh injuries from Manchester United’s midweek defeat at Camp Nou against Barcelona.

Ander Herrera has returned to training and Eric Bailly isn’t far off.

The Spaniard has been strongly linked with a summer move to Paris Saint-Germain, whereas it doesn’t look like Bailly is part of Solskjaer’s plans going forward.

There wasn’t much of an update on Antonio Valencia, who has been back home in Ecuador training, and we’re beginning to think he won’t play for United again.

Solskjaer told MUTV: “The squad is looking good and getting better and better, I have to say. Ander [Herrera] is back in training – he’s been working really hard. Eric [Bailly] will be back in training over the weekend. Antonio [Valencia], we’re not sure about yet.

“Nemanja [Matic] and Alexis [Sanchez] had a good session yesterday as well, so they will probably be involved [vs Everton].”

With Herrera and Matic back training, it will be interesting to see how the Reds line-up in midfield against the Toffees.

Those players have been filled by Scott McTominay and Fred in recent weeks and both had their time in the spotlight. The Scot arguably comes out of that period the strongest, performing home and away to Barcelona, as well as Paris last month.

Next season we’re hoping to see a stronger midfield take hold most weeks. Matic is ageing, Herrera looks destined to leave, and a decision needs to be made on Fred after a difficult first season at Old Trafford.

Solskjaer has his work cut out for him.