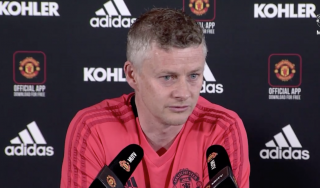 Manchester United haven’t had the greatest month with questionable results and many are beginning to question the difference in playing style to when Ole Gunnar Solskjaer came in.

To say we look more defensive wouldn’t be very accurate. Our attacking players who were performing don’t appear to have the same drive or efficiency in front of goal.

So, despite what Solskjaer told the media at Friday’s press conference, it’s pretty obvious from watching United in recent weeks that the honeymoon period is over and Solskjaer must find a way to get the players back performing again.

The Norweigan says he doesn’t think performance levels have dipped but that’s hard to believe when we’ve gone from playing to so well to being bang average again.

“I don’t think so no, that’s football, margins, we’ve said we’ve lost two league games, Watford and Arsenal, those games we shouldn’t have talked about losing, we won games we maybe didn’t deserve, it evens itself out but players know what’s gonna happen, we know what I expect, as a club what we want to do that’s football,” Solskjaer said, as quoted by the Manchester Evening News.

“When we came in 19 Dec and where we’re at now, I think anyone would have taken that now we’ve got five games to see if we can finish it off.”

While our defence remains questionable, the midfield continues to deal with injuries, and we don’t look convincing in the final third.

Anthony Martial has been shocking since getting his new deal — yet to put in a half decent performance — and when Solskjaer said some players need a reality check, the manager was asked if he was referring to the Frenchman.

“I’ve spoken to individuals and they know and Anthony is one I’ve spoken to, what we expect from them, Anthony’s got a massive talent, got a new contract he knows we believe in him, so just keep working.”

With United still fighting for a top-four finish this season, it’s important these lads all show up in the remaining fixtures. After Everton, United take on Manchester City and Chelsea in the league, two difficult opponents in games we need to take maximum points from…

Paul Pogba is another that needs to start doing more. He’s supposedly a player the others look up to.