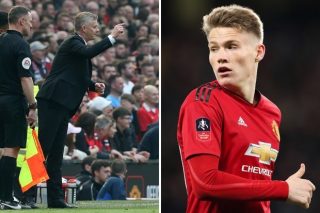 It has emerged from an exclusive from The Sun that Scott McTominay will NOT be leaving Manchester United this summer because the Scotland international is part of Ole Gunnar Solskjaer’s future plans.

The Academy graduate has been brilliant for the Reds in recent weeks, performing brilliantly in the Champions League against Paris Saint-Germain and Barcelona. Those two games seemingly made McTominay a man as he showed a great deal of maturity against top opponents in Europe.

NEXT: Two Man Utd targets on the verge of leaving Juventus

It is alleged that Solskjaer had a one-on-one meeting with McTominay last week the assure the midfielder that he will not be leaving anytime soon.

The Sun notes that there’s been interest from other Premier League clubs wanting to take McTominay on loan, but a source told the newspaper: “Ole and Scott McTominay have a really strong relationship already in such a short space of time.

“They often have chats about what is going wrong or right. They had a very long one at Carrington last week.

“Ole told him how impressed he had been with him lately and to assure him he is in his plans for next year.

“There was talk of a loan move away but that is not going to happen at this stage. He is here to stay for now.”

He has 27 Premier League appearances to his name so far, scoring just one goal, but McTominay continues to show signs of improvement.

Jose Mourinho logging on to Twitter and seeing everyone praising Scott McTominay pic.twitter.com/jG8WwfPNLB

This isn’t a player who is likely to excite many United fans, but he could become an important part of the squad, in a similar manner to how vital Darren Fletcher was to Sir Alex Ferguson’s teams.

The second leg against Barcelona clearly didn’t go out way losing 3-0, but McTominay didn’t drop his head when others appeared to have given up. There could be a strong character in there and we’re pleased to hear he’s part of Solskjaer’s plans next season.