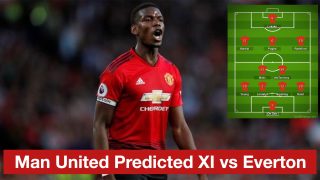 Manchester United must aim to get a faltering season back on track with a top-four finish the solitary aim following European elimination in midweek.

A trip to Goodison Park is always tricky, but there has never been a more difficult time to face Everton. Marco Silva’s side may have lost at already-relegated Fulham last time out, but before then the rejuvenated Toffees had won three on the bounce including home wins over Chelsea and Arsenal.

This looks a tricky proposition for Ole Gunnar Solskjaer’s side. Ander Herrera is back in training but is unlikely to feature, but Alexis Sanchez and Nemanja Matic could return. Luke Shaw completes a two-match domestic ban.

Here is how we think United could line up:

De Gea finds himself under the spotlight after a recent series of high profile mistakes. There is no question that he is still United’s number one, but his blip has become a crisis and it is a worry. Has to improve.

It’s only because there’s no one else to play there that Young keeps on getting picked at right back. Surely his last season, he is dropping mares every week. If not for Luke Shaw’s suspension his place would be under threat. This man is our captain.

After moonlighting at right-back on Wednesday night in the Nou Camp, Lindelof is likely to return to his natural centre-half role at Goodison Park. Chris Smalling always looks more assured and steady with the Iceman alongside him, so expect to see Solskjaer’s first choice pairing back together. Just please not another 90 minutes of the Chuckle brothers..

Has found himself playing just about everywhere in recent weeks, but with Shaw in the final game of a three-match ban, Dalot looks set to start at left-back. Dalot could play on the right, with Young reverting to the other side as he did in Barcelona but either way he will continue his consistent run of games. Marcos Rojo and Matteo Darmian are the other options and neither get anywhere near this team.

Solskjaer’s options have increased with the return to fitness of Matic and Ander Herrera back in training. This one is likely to come too soon for the latter, but Matic is set to get the nod ahead of Fred. With Andre Gomes and Idrissa Gueye impressive in recent weeks for Everton, the midfield battle will be key.

It’s a testament to this lad’s recent upward trajectory that he was considered a key man for both legs of the Barcelona quarter final. With Ander Herrera not yet fit and set to leave in the summer, expect McSauce to remain a significant presence in Solskjaer’s plans as he looks to next season.

Rashford’s form had sky rocketed in United’s initial resurgence under Solskjaer but his form has taken a worrying nosedivre. Wayward with his shooting and unusually hesitant in his runs and movement, Rashford has been playing within himself. Hopefully, it will only be a temporary malaise as his talent needs no embellishment

You get the feeling that another will-he-or-won’t-he saga lies ahead for United’s talented but temperamental enigma. The paradox that is Pogba just refuses to budge from the spotlight, but there’s no denying that on his day, he is the best in the world in his position.

All ability, no mentality. Another, like Rashford, who has gone off the boil in recent weeks. When things don’t go his way, Martial has hidden and I don’t think he has the mental conviction needed to become the world class player his unbelievable talent suggests he should be. The player that frustrates me the most in this side. Our no.11 has sweet memories of taking a bite out of the Toffees with five goals in seven games against the blue half of Merseyside.

Having not scored since his double on that famous night in Paris, Lukaku has come in for criticism as part of United’s wider malaise. The Belgian striker should start against his former side, and if he does feature then it will be his first return to Goodison Park having missed last season’s 2-0 win there. In need of a goal and a return to form.