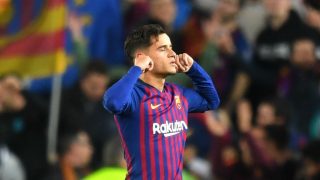 Phillipe Coutinho has commented on his goal celebration after scoring Barcelona’s third goal in victory over Man Utd at the Nou Camp.

Ex-Liverpool midfielder Coutinho put his fingers to his ears in a clear response to backlash he has received from supporters since his move.

Some Barcelona fans jeered Coutinho’s gesture, after he all but ended the Champions League quarter-final tie after smashing an unstoppable strike past David De Gea.

‘We should never listen to people who will demotivate us because their speeches only deviate us from the real focus we should take,’ Coutinho wrote on Instagram.

Man Utd have been linked with a stunning move for Coutinho in recent months, who has reportedly been looking for a move back to the Premier League following an unhappy spell at the Catalan giants.

Sunday Mirror’s Jon Richardson reported last month that Coutinho, 26, has spoken to a number of Man Utd players about a £100m switch to Old Trafford.

Realistically, United fans know that a switch for the Brazilian is about as likely as Cristiano Ronaldo returning to the club. It just won’t happen. Ole Gunnar Solskjaer should focus on some more likely attacking signings this summer, such as a move for Borussia Dortmund youngster Jadon Sancho.