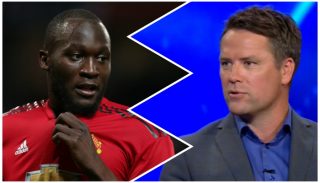 Manchester United take on Everton at Goodison Park on Sunday in a must-win game for our top-four hopes.

Romelu Lukaku returns to his former club where he spent 4 years playing for the Toffees before moving to Old Trafford in 2017.

NEXT: Solskjaer disagrees with claims Man Utd players are dipping in form

Michael Owen reckons Lukaku will upset his former team by winning the game for United.

“Manchester United have their moments early on at the Nou Camp midweek, but they were, ultimately, well beaten by Barcelona and they need to bounce back at Everton on Sunday if they are to maintain their challenge for a top-four spot,” Owen told BetVictor.

“Everton will miss Andre Gomes after his retrospective red card against Fulham at the weekend when the Blues did not play with the energy or pace they had done in their good recent run.

“It is never easy at Goodison, but I feel United will take all three points and keep the pressure on the London clubs who are challenging for the Champions League places. Romelu Lukaku was left out at the Nou Camp midweek, but I feel he will be restored to the starting XI against his old club. He has much to play for.”

Gomes will definitely be a loss for Marco Silva’ men. As a player once linked with United, I’ve kept an eye on him this season, and he’s played very well. The fact he won’t be playing this weekend will benefit the Reds.

It could be a scrappy affair too, with United needing to fight for every ball if they’re to take all three points from the meeting. They’ve kept a clean sheet in each of their last three home games so our forwards will need to show up, especially when Jordan Pickford is due a howler.

European Cup winner in 1968 Paddy Crerand previewed the game for ManUtd.com. He said: “It’s an old stadium that’s got a great atmosphere and it’s absolutely electric in there. They’ve got a fantastic support. A win would be a big scalp for United because it’s a really tough ground.”

Acknowledging United’s Champions League exit on Wednesday night, Crerand continued to focus on finishing in the top four this season.

“We have to finish in the top four now. It makes every game between now and the end of the season a massive match.”

And that’s exactly what we have in store this weekend.

Owen’s betting tip for the game is Lukaku to score anytime.