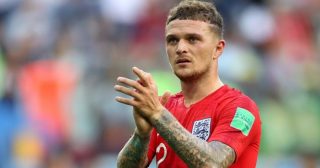 Manchester United are providing competition to Serie A giants Napoli in the hunt for Tottenham full-back Kieran Trippier.

According to Italian journalist David Amoyal via Gianluca Di Marzio, the Reds are showing interest in Trippier, 28, as they look to strengthen an area of weakness at right back.

Ashley Young is in a steady decline and has come under severe criticism from some sections of supporters, and Diogo Dalot is still developing in the defensive postition.

This means Ole Gunnar Solskjaer is prioritising a new right-back this summer, and Trippier now looks to be a target.

The Bury born defender provided heroics for England at last summer’s World Cup opening the scoring in the semi-final against Croatia with an unforgettable free-kick.

However, Trippier has been in indifferent form this season, struggling to live up to the form he showed in last summer’s competition.