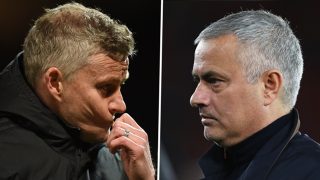 The Portuguese tactician, who was replaced by Ole Gunnar Solskjaer, slammed his former club for “awful defending” against one of the best teams in Europe, still in contention to win the Champions League after eliminating United.

NEXT: Scott McTominay told he will not be leaving Man Utd this summer

Barca beat United convincingly over two legs as the Reds recorded their worst ever aggregate defeat (4-0) in European competition. On Tuesday night, Lionel Messi netted a brace and Philippe Coutinho scored from distance.

And Mourinho, as we know him, is not one to keep his thoughts to himself.

“Lots of mistakes, lots of goals with awful defending on the inside foot,” Mourinho told Russia Today, as cited by The Mirror. “You look to Coutinho goal, even to Messi goal.

“I think United’s approach was different. I think in the first game they tried to occupy that central zone because Messi’s position is easy to understand but is not easy to create a cage to control him.

“Because he comes from the right, then stays in the middle, and then Rakitic defends on the right and allows him to stay in the middle between the lines. It’s very difficult.”

Mourinho is not being harsh on United here. Our heads dropped after David de Gea’s howler, and that wasn’t helped by Ashley Young’s shocking use of possession prior to Barca’s second.

The defending was awful and the number of mistakes acted as endless invitations for the hosts to do damage.

Solskjaer was doing a good prior to this blip but he needs to learn from mistakes, especially when they’re coming from players who are regularly at fault.

So, does Mourinho think they would have preformed any better if he was still manager? There isn’t a lot of evidence to suggest that would be the case.

“In this match, maybe because Man United were losing 1-0, they tried to start the game with a different perspective.

“And then it was Pogba wide on the left and McTominay much more on the right and Jesse Lingard playing as a number 10 behind the strikers. And in front of the defensive line was only Fred.

“And that’s the area where Messi comes and gets the ball and when Messi has the ball – one on one – you are dead.

“That’s why I never liked individual man-on-man against Messi. Messi’s a cage. You have to create a cage.”

There is no denying that United’s form picked up following Mourinho’s sacking, though the performance against Barca during the week showed the gulf between the sides, and Solskjaer must work towards bridging that gap.

Of course, with United going into the tie as underdogs, we weren’t expected to beat Barca.

After knocking PSG out the way United did, we should be forgiven for having hope, even if it was false hope.