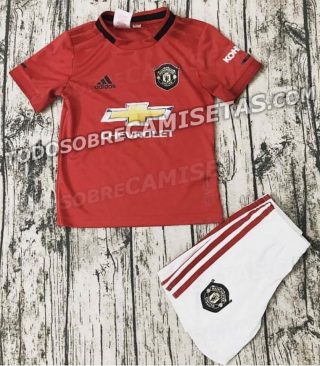 Manchester United fans have been having their say on a new leaked image which could prove to be Ole Gunnar Solskjaer’s side’s strip for the 2019/20 campaign.

The leaked Adidas strip features a black crest surrounding a golden badge, striking similarities of the famous shirt of 20 years ago in the 1999 Treble winning season.

The shirt is completely red in design and has a black trim around the collar. United’s new strip will reportedly include dates that the Reds won the FA Cup, Premier League and Champions League in 1999.

This leaked image has provided mixed responses from supporters online, with some Reds unhappy with the Chevrolet logo in the centre of the shirt.

Check out some reaction to the new shirt below:

Our kits just keep getting worse year by year. Arrrrgghh!!!

That kit is awful, the designs are getting worse!

The Chevrolet logo is ruining all our kits.

Not a fan of the kit to be honest. Looks very dull.