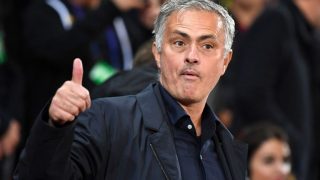 Jose Mourinho has had his say on who should win the Ballon’Or.

Unsurprisingly, ex United manager Mourinho has selected Lionel Messi as deserving of the award after he inspired Barcelona to knock out Man Utd with a comfortable victory at the Nou Camp.

Messi scored the two opening goals in the first half to all but secure United’s exit. His first strike was typical of Messi’s brilliance, ghosting past one United defender and slotting past David De Gea. The next however, could only be described as a catastrophic mistake from our number 1, who has not been at his world- class best in recent weeks.

“Messi is experiencing a fantastic season. Now that Cristiano Ronaldo’s Juventus has been eliminated from the Champions, the Golden Ball is waiting only for the Argentine,” Mourinho said on Russia Today via Calciomercato.

Messi’s competition for the prestigious award, United legend Cristiano Ronaldo, was knocked out of the Champions League by Ajax in midweek so is unlikely to claim the award. Both are currently tied on five Ballon d’Ors each and United fans would love their ex number 7 to finish on top when both eventually retire.

The last United player to win the most prestigious individual honour was Ronaldo, after his incredible season in red shirt in 2008.