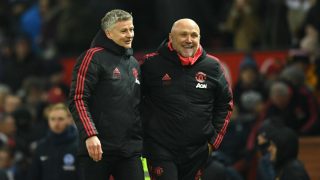 Fans’ favourite Mike Phelan is advising Ole Gunnar Solskjaer on Manchester United’s transfer plans as the club prepares for another rebuild, according to the Manchester Evening News.

The report claims the pair have spoken about recruiting players who are the right fit for United, focusing on those younger with tons of potential.

It is believed that they’ve agreed to target young British talent such as Jadon Sancho, Declan Rice and Aaron Wan-Bissaka, as per ESPN.

In the post Sir Alex Ferguson years, United have been guilty of a transfer strategy that saw superstar signings made but without the expected success rate. Phelan allegedly wants this changed and MEN claim Solskjaer is in agreement with his assistant manager’s outlook.

However, Phelan is still yet to be installed as the full-time assistant manager. We expect that to be announced soon, as it’s unlikely he will reject any offer and return to the Central Coast Mariners in Australia, who is still contracted to as their sporting director.

United need players who can come in now and make a difference. If they’re targeting young players to do that, they’re not going to come on the cheap. Take Borussia Dortmund’s teenage sensation Sancho as an example. The Bundesliga giants are in a position where they can demand £100 million for the 19-year-old, after racking up a combined 25 goals and assists this season.

That will take a significant chunk out of United’s transfer kitty.

But isn’t it better than we’re seeing speculation about Sancho joining United instead of Real Madrid’s Gareth Bale?

Meanwhile, the MEN hint that United have been monitoring Rice and suggest he could arrive in the coming months as a replacement for PSG bound Ander Herrera. The 20-year-old has been terrific this season for West Ham, though Atletico Madrid’s Saul Niguez, 24, could be an alternative option.

The other Englishman linked with United is Wan-Bissaka. United need to do something about right-back next season instead of sticking with Ashley Young for another campaign. No thanks to that!