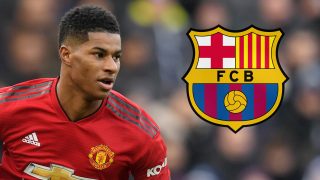 Marcus Rashford is reportedly hesitating over signing a new Manchester United contract, as per the Daily Mail.

The England striker’s contract is set to expire in 2020 and the report claims he is demanding £200,000-a-week if he’s to agree on a new deal.

Everyone is only coming to terms with the amount of work that needs to be done to get United back on top and Ole Gunnar Solskjaer has Rashford as part of his plans for the future. It would be a massive kick in the balls to lose him anytime soon, amid links to Barcelona (via ESPN).

Interestingly, the Daily Mail’s report mentions all the speculation over Barca’s alleged interest and how the timing annoyed United, prior to being knocked out of the Champions League by the La Liga champions.

Do you think the Manchester United star should leave Old Trafford? #KOEngage pic.twitter.com/vcxZ8DTdEo

They should be able to sort something out when it comes to negotiations as losing Rashford at this stage wouldn’t go down very well with supporters. He should be working on becoming a 20+ goal per season striker at Old Trafford.

Apparently, Rashford’s entourage feels as though they’re in a strong position and don’t want to rush into committing anything long-term. The reported wage demands are massive but this is a player United need to keep hold of…

I just hope this doesn’t drag on.