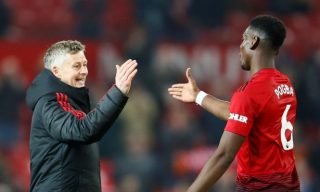 Rio Ferdinand has acknowledged that Paul Pogba could leave Old Trafford in the summer.

Pogba failed to make much of an impact in both legs against Barcelona, as the Reds were eliminated from the Champions League following a 3-0 defeat at Camp Nou on Tuesday night.

The 26-year-old has been linked with a move from United ever since he fell out with former manager José Mourinho, but Stretty News understands the player has a good relationship with the current Old Trafford boss.

But Pogba needs to start showing that again by winning football matches for Manchester United. He did that for a brief period when Solskajer became interim manager, though now many of the ‘revitalised’ stars have gone backwards again.

“I think there’s a big decision in the summer. I think it’s up to Ole Gunnar Solskjaer,” Ferdinand said on BT Sport, as quoted by Goal.com.

“There’s been things in the media mooted that he might want to leave or he’s fancying a trip abroad but I think you build the team around a player of this calibre.

“He’s got 16 goals this season, albeit six of them penalties – but the output in terms of goals has shown a marked improvement since Ole’s come in. So that’s a thing I’m sure he’ll take into account.

“To shift blame on him from a game like today [Tuesday], I think no-one’s come out of this with any flying colours.

“It’s going to be over the time that’s Ole’s been here and Ole will have to judge: ‘Do I build the team around him and the ability that he’s got and the attributes that he has?’ or if Paul wants to leave.

“I would keep him here because Man United, they need stars, they need players who can turn games and he can do that.”

There is bound to be plenty of Pogba speculation this summer and it’s going to be annoying if he laps it up with teasing social media posts.

And, now, our focus must be on finishing in the top four. With Everton on Sunday and Manchester City next Wednesday, the Reds have a lot to get done in the coming days if they stand any chance.