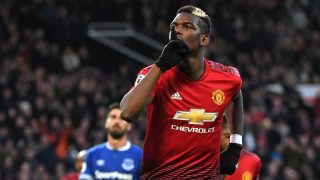 Manchester United will be aiming to get back to winning ways on Sunday against Everton after being knocked out of the Champions League during the week.

Especially when anything but a win could put our top four hopes in real doubt.

Tottenham also take on Manchester City at the weekend and we’ll be looking for our rivals to win for two reasons; to stop Liverpool winning the league and for Spurs to drop points as direct competitors.

Of course, United shouldn’t be worrying about Spurs. The aim should be winning league titles which is something Ole Gunnar Solskjaer hopes to bring back to Old Trafford.

This weekend’s trip to Goodison Park is crucial. It takes place on Sunday afternoon (1.30pm), before Arsenal vs Crystal Palace and Cardiff vs Liverpool.

It will be televised on Sky Sports Main Event and Sky Sports Premier League as part of their Super Sunday coverage.

Everton manager Marco Silva could have defender Yerry Mina back from injury, while ex-United midfielder Morgan Schneiderlin is being assessed after taking a knock to his ankle.

The Toffees will miss Andre Gomes, who is suspended for violent conduct in Everton’s shock defeat at Fulham. He has been brilliant this season and any team facing Everton without him in midfield should benefit.

As for United, Luke Shaw is still suspended after picking up 10 yellow cards in the league this season. He returns for the Manchester derby next Wednesday.

Ander Herrera’s apparent groin injury is likely to keep him out for the match. I am beginning to wonder if it’s just a matter of keeping himself fresh (avoiding injury) ahead of a summer switch to Paris Saint-Germain? Poor form, if so…

There could be a change in defence for the Reds after Chris Smalling felt his hamstring in Tuesday’s defeat in Barcelona, but Alexis Sanchez should get more minutes under his belt after returning midweek.

United will be wary of Sunday’s opposition after they recorded landmark wins against Chelsea and Arsenal in the past few months. The only factor that has me confident going into the game is our away form. We look more potent in the final third when on the road.