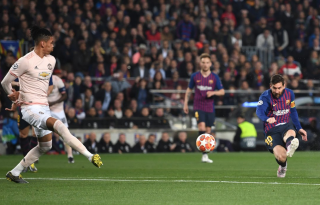 Manchester United got off to a positive start on Tuesday night with Marcus Rashford hitting the woodwork inside the first 30 seconds.

Rashford then created an opportunity for Scott McTominay, who was unable to get the ball under control.

It was short lived and United were punished for not taking advantage of their early dominance.

Ashley Young gave away possession cheaply to Lionel Messi before the Argentine cut the edge of United’s box to score a superb opening goal.

Messi added a second minutes later thanks to a howler from David de Gea, which saw the goalkeeper laughed and jeered at by Barcelona supporters before the second-half.

His brace against United means Messi has found the net 24 times in 32 Champions League games against English opposition. No player has scored more against a Premier League side in the competition.

24 – Barcelona’s Lionel Messi has scored 24 goals in 32 Champions League games against English opponents, more than any other player in the competition. Unstoppable. #FCBMUN pic.twitter.com/laLDNO6gFa

That’s an incredible record and one Messi is likely to build on in the next round if Liverpool get throughout without scratches.

The Scousers go into their second leg with FC Porto tonight holding a two-goal advantage. One foot in the semi-finals which is easier said when they got an easier draw than most teams left in the Champions League.