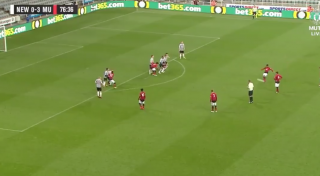 The U23s were in action on Monday night and pulled off a convincing 5-0 win over Newcastle with Mason Greenwood scoring the best of the goals.

The 17-year-old has shown incredible form throughout the season and warrants each of his call-ups to the first team. This term, he has scored 24 goals and provided six assists at youth level for United, while making a couple of appearances for the senior side.

If Greenwood continues to produce moments like this free-kick seen below, there’s a good chance Ole Gunnar Solskjaer will make more use of the kid next season, once he keeps developing.

Greenwood struck the free-kick from distance with the right power, flight and bend to beat the goalkeeper.

United fans will hope this is a glimpse of Greenwood’s future at the club.

Mason Greenwood has just scored this free-kick from 25 yards out. Wow. pic.twitter.com/Fc2ccaHoAY