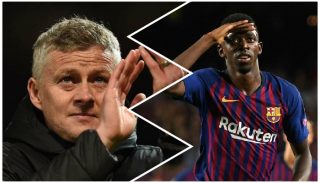 Barcelona appear to have no selection concerns ahead of tonight’s Champions League quarter-final second leg at Camp Nou.

Manchester United, on the other hand, are without Luke Shaw through suspension, while Eric Bailly and Ander Herrera remain sidelined.

NEXT: Ronaldinho offers hope for Man Utd against Barcelona in Champions League

The La Liga champions have Ousmane Dembele fit again and available to start after being an unused substitute in the first leg at Old Trafford.

But it sounds like Ole Gunnar Solskjaer has been warning his defence about the French winger, stating that he is one of the quickest players he defence can face.

“Dembele is one of the quickest that our defenders can play against,” Solskjaer said, as per ManUtd.com.

That is far from ideal in a game United have to switch from their preferred full-backs. And, even at that, there isn’t a lot of confidence in Ashley Young after some of his displays this season.

It also shows how Barcelona have an array of players available that can hurt United. Everyone talks about Messi and the damage he can inflict on teams, but we cannot forget about Luis Saurez and Philippe Coutinho also.

Dembele was criticised a lot last season, his first at Barcelona, for not hitting the heights expected. Hopefully, the lads can keep him a co quiet tonight.

Solskjaer is said to be looking to sign a right winger this summer, so perhaps he’s looking for a pacy option to hurt teams like Dembele. United have been linked with a mega-money move for Borussia Dortmund’s Jadon Sancho, as reported by the Manchester Evening News.