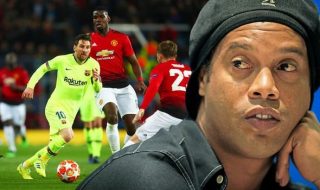 Ronaldinho believes the tie is still on for Manchester United to come from behind, though we’ll be needing to score first…

It goes without saying that United need to attack Barcelona tonight.

But opening up could leave the Reds vulnerable and they ought to be cautious of the threat Barcelona pose, especially with Lionel Messi lurking in and around the final third.

The Brazilian feels his former club should have finished the game in Manchester where the first leg ended 1-0 after a Luke Shaw own goal.

“The truth is that Barcelona should have finished the game in Manchester – but at 1-0 Manchester United will still believe that they are in this tie,” said Ronaldinho, as per The Mirror.

“With the way that Barcelona have been playing and the amount of goals they have been scoring, I do expect them to progress.

“I see them even winning comfortably in Barcelona. It will all be on the first goal.

“If Barcelona score it then it will be a long evening for Manchester United.

“But if they (United) can score the first goal then it’s going to make the stadium nervous – and you never know what can happen then.”

It’s interesting to hear from a former player of a club say United have a chance of beating them tonight, considering they have been favourites since the quarter-final draw was made.

Ronaldinho enjoyed the best period of his playing career at Barca, winning the Champions League and two La Liga titles, and is a player that probably should have ended up at United instead.

Camp Nou could play a huge role in tonight’s game. Scoring the first goal early on could unnerve not just the home support but the players too.

It will be the first time playing at the stadium for quite a few of our players, but they did superbly in Paris against PSG, which proves they’re a side not willing to give up easily.

Ole Gunnar Solskjaer has the bones of a good side with winning spirit. It just lacks consistency and a real cutting edge in midfield to truly exploit teams.

There’s about a month left until the football season ends. Let’s hope Solskjaer and the lads take a lot from working together and build on it next season.

Tonight could be special.