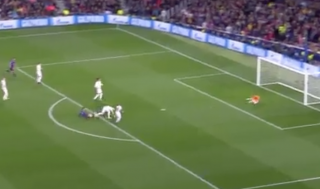 Barcelona have David De Gea to thank for doubling their lead at the Nou Camp, with the Spanish goalkeeper’s howler helping the Catalan giants to an unassailable 3-0 aggregate lead.

NEXT: Loads of MUFC fans blame the same player for Lionel Messi goal

United made an encouraging start to the second leg at the Nou Camp, as Marcus Rashford missed two opportunities early on.

But Messi’s class showed after he ghosted past Fred and slotted past De Gea, who just minutes later provided what was perhaps the howler of the season.

De Gea maybe forgiven for his world-class previous performances for the Reds, but this will be one to forget for the Spaniard.

Fans are understandably not happy with the error:

Lionel Messi has his second, but has David de Gea to thank for it…

The ball squirms under the Man Utd keeper as Barcelona go 2-0 up. pic.twitter.com/5IrkRJ3SyH

David de Gea really is a different player whenever he plays in/for Spain. And it's not exactly a better player.

Scandalous. Shocking. Shambolic. Disgusting. I'm fucking fuming, I love David de Gea but what the fuck was that?

David De Gea has saved us plenty the past few seasons, this season however… I’ll leave it at that.

The nasty side of our fan base coming out in force tonight. For years David De Gea has been pulling miracles for us. Suddenly a couple of below par performances & he is being slaughtered & we have the cheek to laugh at Madrid fans etc. We all make mistakes. Even De Gea #mufc

David De Gea literally prepared for Messi to go on and do that? No doubting his quality but it seems like when it’s one the big stage (this game and the World Cup) maybe nerves get the better of him.

Game over due to two huge mistakes by Ashley Young and David de Gea.

Oh my god. Goal for Barcelona. David De Gea looks to have claimed Messi’s shot but he fumbles into his own net. 2-0. Another De Gea error.