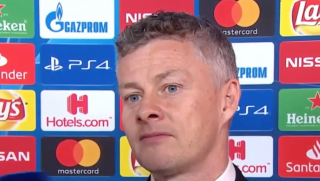 Ole Gunnar Solskjaer’s Champions League dream has ended with a humbling 3-0 defeat to Barcelona at the Nou Camp.

It was not to be a repeat of United’s famous night in Paris last month as Solskjaer’s side succumbed to the distinct superiority of their dominant Catalan opponents.

“I have to say Lionel Messi is top quality and he was the difference of course. At 2-0 straight after it was game over,” Solskjaer told BT Sport via the BBC.

“He’s different class, he and Cristiano Ronaldo are the best players of the last decade, everyone agrees on that one. Messi showed his quality.

“We have to aspire to get to that level of Barcelona, we can get there but we have loads of work to do. If we want to get back to Man Utd’s true level, true traditions, we have to challenge Barcelona.

“They were a couple of levels above over the two games. We want to play these games again next year so we have a massive week coming up. There is no point dwelling on what could have been, we have to focus on that week.”

United had started brightly, with Marcus Rashford missing an early opportunity. But Barcelona soon asserted their authority in the tie after they had a penalty decision reversed by VAR.

Lionel Messi dispossessed a sloppy Ashley Young and ghosted past Fred before curling an excellent effort into the bottom corner. David de Gea then had a moment to forget after Messi’s weak right-footed effort somehow squirmed under the Spaniard’s arms to double Barcelona’s lead.

Phillipe Coutinho compiled United’s misery on the hour mark with a third, a trademark cut inside and curled an effort into the top corner past  De Gea.

It was soon a case of damaged limitation for Solskjaer’s men, with Barcelona’s stars toying with United’s defenders throughout the second period.

Solskjaer will know the importance of securing a Champions League spot for next season with just five league games left remaining. The Reds face a trip to Everton on Sunday before the Manchester Derby at Old Trafford next Wednesday.