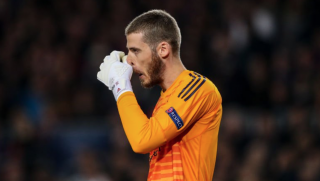 Manchester United are out of the Champions League.

Nobody will argue against the outcome of the tie as Barcelona deservedly progress into the semi-finals.

They’re likely to face Liverpool in the next round and hopefully tear the Scousers a new one.

Two costly mistakes in the first half resulted in heads dropping. We lost any tempo we had and attempts to get Marcus Rashford and Anthony Martial running at Barcelona’s defence dwindled.

While Ashley Young made matters worse for himself and warrants criticism, question marks could also be asked of Phil Jones. It’s important not to underestimate the brilliance of Messi before taking it out on Jones.

James Robson of the Evening Standard explains it well below.

How would Twitter have reacted if it had been around in the days of Pele and Maradona?
Utterly ridiculous to deride Phil Jones for failing to stop Messi. If it was that easy, Messi would not be Messi

A mistake which saw David de Gea let the ball slip beneath his body to give Lionel Messi a second. The Barcelona fans enjoyed that one as they jeered the goalkeeper after the interval.

Then, the final nail in the coffin, a cracker from Philippe Coutinho in the second-half completely finished us off. It was one of those long-range goals he’d often net during his time at Liverpool…

Barca closed the game out as comfortably as you’d expect them to. A possession-based side in its happy place, knocking the ball back and forth as if United weren’t there.

The first leg at Old Trafford wasn’t like that and gave us false hope.

Sure, there’s no denying that it is a blow to be out of Europe, but after knocking Paris Saint-Germain out in the last round, perspective is needed.

Our chances against PSG were laughed at following the draw. José Mourinho’s United were a mess until Ole Gunnar Solskjaer came in and gave us some hope.

I didn’t expect us to reach the quarter-final. I’m delighted we did even though United were well-beaten.

Now our focus is on the top four. Nothing more, nothing less.

Tonight’s result could rattle the side a bit but United must pick up the pieces in time for Everton this weekend.