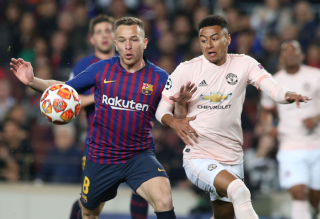 Manchester United suffered a hardly surprising 3-0 defeat at the Camp Nou to end their last chance of silverware this season. A pair of individual errors from Ashley Young and David de Gea allowed Barcelona talisman Lionel Messi to grab his brace before former Liverpool star Philippe Coutinho added to the misery with an incredible long-range effort.

Struggles to keep the ball and make any formidable attack, as well as show consistency and cohesiveness at the back, are reflected in the ratings today.

It’s hard to tell what has happened with the Spaniard but he simply does not seem his usual self. Gave away a free goal for Messi’s second. Distribution wayward. Made one ridiculous save off Sergi Roberto but it appeared accidental.

It seems unfair to Lindelof that he was moved to right-back, completely destroying United’s defensive organization and rendering him ineffective.

Perhaps the only surviving member of United’s back four, he didn’t really put a foot wrong although his communication with de Gea appeared poor at times.

While he got spun by Messi three times in one play and offered nothing to advance the ball, Jones still did not get entirely destroyed by Barcelona’s rampant attack.

Good grief. United didn’t have a good game but it was Young who started the downfall with an incredibly fickle individual error to allow Rakitic into the game.

Considering what he had to deal with, McTominay didn’t have a bad game, moving about and making interventions in the back line. He could end up being a starter next season with some of the rebuilding needed in other positions.

A truly strange player, Fred did not address the needs of United’s midfield at all when signed last summer, not through the type of player or level of performances produced. He mixes great moments with truly frustrating ones and could ultimately go down as another failed midfielder.

Pogba was unable to influence the match once again, but he was left helpless- never picked up the ball in good positions, never had runners to pick out, and leaves another match seeming either not ambitious enough or more ambitious than the club.

It’s baffling that Lingard keeps getting picked for key matches at this point. Might as well fill his spot with someone slightly less anonymous, it could be anyone. Even Alexis Sanchez offered more tonight.

Again, Rashford was poor; he’s masked one of his poorest stretches at United with a series of relatively lucky goals. That being said, I would have taken a lucky goal today.

Time and time again, Martial is a threat, but he compounds his frustration with a tendency to make the wrong decision at the last man or not make the right move to support his teammates.

It’s hard to see why he replaced Martial in the first place and not Ashley Young, and the same can be said about Dalot not starting the match. Again, might as well use players with upside who may play well if it’s almost certain the player who starts isn’t going to.

Showed flashes of production when he first came on but didn’t influence proceedings afterwards.