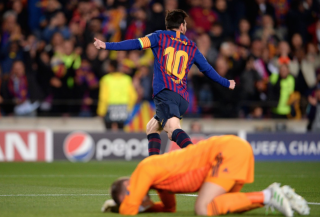 David de Gea was subject to an absolute howler in the first half against Barcelona.

Spain’s No.1 was then greeted with jeers from the Barca fans after half-time, lapping up the fact a player with close ties to Madrid had made a costly mistake in their favour.

The mistake is bound to get plenty of analysis and some might question whether De Gea has lost focus with contract talks still ongoing.

Does he have second thoughts about staying at United with Zinedine Zidane seemingly keen to sign him and replace Thibaut Courtois?

It was discussed at half-time during BeIN SPORTS’ Champions League coverage.

A suggestion was made that the ball approaches De Gea so slowly he could have controlled it with his feet.

Watch the clip below for more.

“He could’ve literally controlled it with his feet and started an attack it was that slow!”