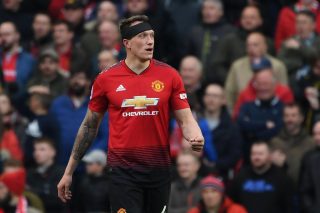 Ole Gunnar Solskjaer has named his team to take on Barcelona at Camp Nou.

There’s a place in the Champions League semi-finals up for grabs but Manchester United must overturn a one-goal deficit.

NEXT: Match Preview: Man Utd need another miracle at Camp Nou to reach semi-finals at expense of Barcelona

Luke Shaw deflected the ball into his own net in the first leg and that was Barcelona’s only goal.

Solskjaer will hope he has named the right side to give United every chance of stunning Barca and qualifying.

In defence, it looks like Phil Jones will play at right-back, which is a position he played under Sir Alex Ferguson. Ashley Young will operate on the opposite flank while Chris Smalling partners Victor Lindelof at centre-back.

There are no surprises in midfield with Fred, Scott McTominay and Paul Pogba all starting.

Jesse Lingard will either attack from the right or in behind Marcus Rashford and Anthony Martial. This could change throughout the match, depending on United’s success rate against Barcelona’s defence.

See the announced team in full below.

Time for the news you’ve all been waiting for!

Here’s your #MUFC side for tonight’s #UCL tie…