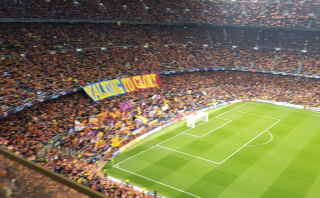 The game has just kicked-off with Barcelona taking a 1-0 advantage into the game from the first leg at Old Trafford.

Before the game, Barcelona fans unveiled a banner that you could only describe as arrogant.

‘Walking To Glory’ was the message sent across from the Barcelona end, suggesting that tonight will be a walk in the park.

It’s not all that insulting from our point of view, though adds to the atmosphere at Camp Nou on a big night for European football. They have every right to be confident about their chances. They’re the favourites with good reason.

See the banner below, shared by journalist Richard Martin.

Walking to glory? Bit insulting if you ask me pic.twitter.com/vUmoTRs9tb