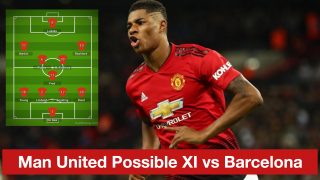 Manchester United travel to Barcelona for the second leg of the Champions League quarter-final. We take a look at what sort of team Ole Gunnar Solskjaer can field against the La Liga champions.

In the last round, United were also in need of a comeback in the second leg. Paris Saint-Germain were left stunned on their own turf as the Reds won 3-1 on their travels. It will take something special to repeat that against Barcelona, but as fans, we must keep the faith and believe Solskjaer can get the best out of his group of players.

NEXT: Man Utd need another miracle at Camp Nou to reach semi-finals at expense of Barcelona

United registered an unconvincing 2-1 win over West Ham in the Premier League last weekend. They will hope to build on that after returning to winning ways.

In defence, Solskjaer must deal with Luke Shaw’s suspension. That will see Ashley Young switched across the left-back and we expect Diogo Dalot to start on the right. David de Gea, Chris Smalling and Victor Lindelof are all definite starters.

The midfield shouldn’t change from the first leg. Scott McTominay got his rest at the weekend and he was brilliant against Blaugrana last time out. Praise should also be given to new signing Fred, who has had a difficult first season in England with some quick to dismiss the Brazilian as a flop. The final mention of midfield is a calling to Paul Pogba to make this one of his standout games, preferably causing problems for Sergio Busquets again. The Spaniard is lucky not to be suspended for this tie after a number of yellow card offences in the first meeting between the two clubs.

Romelu Lukaku, Marcus Rashford and Anthony Martial should lead the line. Our three best attackers in a must-win game. Rashy will need to improve on his decision-making if he is to give United a breakthrough in the game, while Martial really needs to step up after some terrible performances of late.