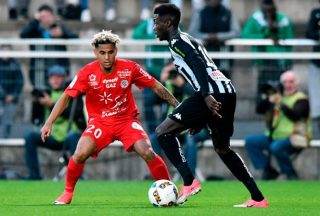 Arsenal and Manchester United have both reportedly been tracking Lille winger Nicholas Pepe this season.

The Ivory Coast attacker has had an incredible season in Ligue 1, scoring 19 goals and contributing 11 assists, as per WhoScored, and it’s no wonder he is attracting attention from some of Europe’s biggest clubs. If it wasn’t for his consistent form throughout the season, Lille probably wouldn’t find themselves in with a chance of qualifying for the Champions League.

In Sunday’s edition of Telefoot, there was a rather revealing interview with Lille chairman Gerard Lopez, who confirmed that Pepe would be sold this summer. Quotes from the Manchester Evening News.

“It is certain, he will leave. He has moved into a price range that we can not afford anymore.

“There is a career choice to make for him, I think he will have the choice.”

Arsenal correspondent for Goal, Charles Watts, notes that while the Gunners have a longstanding interest in Pepe, it is Bayern Munich who are favourites to seal his signature.

Arsenal’s interest in Pepe is longstanding, but feels like he may have moved out of reach. Bayern very much favourites for the Lille winger. https://t.co/Ts2JtZ45MZ

The Guardian’s Barry Glendenning touches on the latest, including United’s apparent interest.

The Reds could do with a strong option on the right to help balance their attack. At the moment, it’s too heavy on the left, and it’s not as if Anthony Martial has pulled any trees up since signing his new contract.