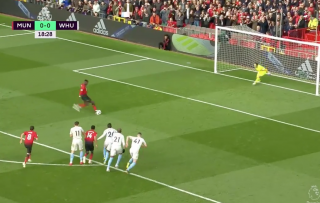 Paul Pogba just opened the scoring for Manchester United against West Ham from the penalty spot.

The Reds won a penalty after Snodgrass fouled Juan Mata on the edge of the penalty area, however, there are some pundits in disagreement over it being given.

United’s talisman stood up to the penalty spot and slotted home to hand his side a first-half lead.

NEXT: Champions League tie not over for Man Utd, claims respected journalist

If United are to finish in the top four this season they ought to be beating the likes of West Ham in the league.

Pogba didn’t bother with a dramatic run-up to his penalty either. He struck with power and straight past the goalkeeper.