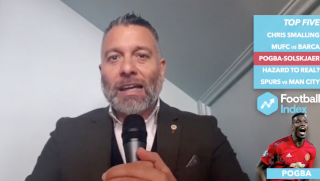 There has been a few whispers of discontent over the past few weeks. Some which we decided not to entertain and for this very reason…

Guillem Balague claims any suggestion of unrest between Ole Gunnar Solskjaer and Paul Pogba is rubbish. He says the Frenchman still has utmost respect for his manager, who initially coached him as a member of the academy.

Real Madrid have been strongly linked with a move for Pogba this summer, with the World Cup winner recently admitting it would be a “dream” to play for the Madrid club.

Zinedine Zidane then openly expressed his admiration for Pogba and suggested that he would like to work with him.

The Spanish football writer says Pogba would one of the bigger personalities in the dressing room who wanted Solskjaer to be given the United job on a permanent basis, so it would be a surprise if he pulled such a U-turn so quickly.

Balague is of the view that only Pogba will benefit from all of this talk, by potentially getting a new contract out of it all. See below.

Rumours have it that there has been a rift between Paul Pogba and Ole Gunnar Solskjaer. How true is that? What’s really going on? #MUFC

The Standard reported this morning that United are preparing for negotiations with Pogba over a long-term deal. Though the story doesn’t reveal whether he wants to stay at the club, it will be interested to see how it all plans out.

Pogba is certainly a player you should want to keep at United. It’s just about getting the best out of him consistently.

Check out his full video below.