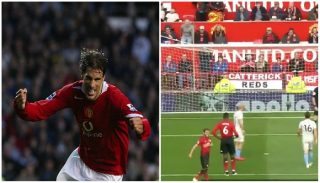 Manchester United are leading West Ham 1-0 thanks to a Paul Pogba penalty.

The Frenchman struck home from the spot to score his sixth Premier League penalty of the season.

West Ham had a goal disallowed for offside which should have stood in the early stages. Felipe Anderson scored and celebrated until the linesman ruled it out.

Ruud van Nistelrooy currently holds the record for most Premier League penalties scored in a single season for Manchester United. He netted 8 in 2002/03 which amounts to two more than Pogba this season.

Pogba changed his technique for his penalty against West Ham today.

There was no overly dramatic run-up to the ball. He smashed it home instead!

More of the same from Pogba and he could equal or even better Van Nistelrooy’s record.