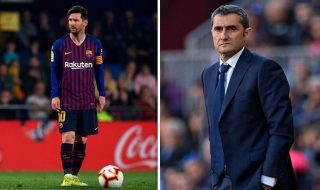 The Argentine was left with a bloody face and in need of treatment on the pitch, and he will now will Barcelona’s La Liga trip to Huesca this weekend ahead of the second leg against United at the Camp Nou on Tuesday.

Barcelona take a one-goal advantage into the second leg after a Luke Shaw own goal deflected the ball past David de Gea in the opening stages of the first encounter of the tie.

NEXT: Man Utd prepare for negotiations with Paul Pogba over long-term deal, also in contention for club captaincy

Messi picked up a bloodied nose and a swollen eye for his troubles when Smalling won the ball strongly in the air.

The five-time Ballon d’Or winner wasn’t at his best against United, but Barca manager Ernesto Valverde insists he took quite a blow during the game, describing Smalling’s brilliant work as truck-like.

“I spoke to him and he is fine, but it was a hard knock,” Valverde said, as quoted by the Manchester Evening News.“He wasn’t feeling good the day after nor during the rest of the match. It was like a truck had run over him.”

I don’t know about you, but I get a feeling hearing this will give Smaldini a boost in confidence. All the better if it helps him perform at Camp Nou next Tuesday.