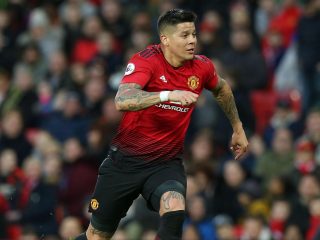 Ole Gunnar Solskjaer has named his starting eleven to face West Ham in the Premier League.

It’s a must-win game for Manchester United at Old Trafford, with the Reds losing four of their last five games across all competitions.

United need to get back to winning ways if they’ve any chance of securing a Champions League spot for next season.

NEXT: Champions League tie not over for Man Utd, claims respected journalist

In defence, Diogo Dalot and Marcos Rojo take up the full-back positions. We’ve not seen much of the Argentine this season, so it will be interesting to see how long he lasts on the pitch today. Two England internationals fill in at centre-back, with Phil Jones replacing Victor Lindelof in the starting eleven. The Swede is on the bench and is likely being rested before the Champions League quarter-final second leg against Barcelona on Tuesday night.

Fred keeps his place in midfield after a brilliant display against Barcelona, although Wednesday night’s man of the match, Scott McTominay, is on the bench. It looks like Juan Mata will play a deeper position in midfield, along with Paul Pogba. That should bring plenty of creativity to the side.

Then, a front three of Jesse Lingard, Romelu Lukaku and Anthony Martial take up the attacking roles. They’re all worthy of netting one or two goals today.

Let us know what you think of the starting eleven.