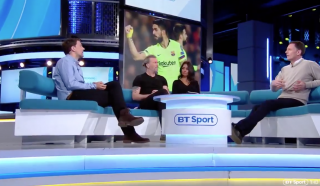 Smith believes United will fancy their chances against Barcelona after inflicting moments of pressure in the first leg that should worry the La Liga champions.

“If Barca play like that again, even at the Nou Camp, Man Utd will fancy their chances.”

Barcelona left Old Trafford with an away goal but @RorySmith was not impressed by what he saw.#SaturdaySav pic.twitter.com/AOtqLYNImr

It’s only 1-0 at half-time in the tie, so perhaps Smith is right but we’ll keep the faith until United are eliminated from the Champions League.

United may not have had a shot on target, but they racked up a greater total of shots than Barcelona, who scored their only goal when Luke Shaw deflected the ball past David de Gea and into his own net.

Barcelona showed clear signs they have the technical players to put the sword to United, but talisman Lionel Messi wasn’t at his best, admittingly after colliding with Chris Smalling which left him with a bloody face.

Ernesto Valvedre has ruled Messi out of Barcelona’s La Liga trip to Huesca this weekend ahead of the second leg against United.

“I spoke to him and he is fine, but it was a hard knock,” said the Barca manager, as per the Manchester Evening News.“He wasn’t feeling good the day after nor during the rest of the match. It was like a truck had run over him.”

So, maybe the Reds should ruffle some feathers again and make their presence known against Barcelona next week.