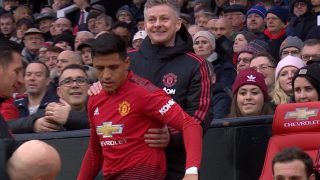 Ole Gunnar Solskjaer will be delighted to have more players training after several injury set-backs.

One player back training is Alexis Sanchez, who we first saw back in Carrington on Tuesday when the club invited members of the press to open training as United prepared for their first leg clash against Barcelona.

It would have come as a blow to Sanchez to miss out on facing his former club, but he could be in line to feature when United travel to Camp Nou.

Solskjaer held a press conference this morning, as quoted by the Manchester Evening News: “He [Sanchez] is training with us, he’s trained twice, trained today. I’m not sure if he’s gonna be available, he is injury free but not sure 100 per cent for tomorrow, maybe more likely for the Barcelona game. Let’s see.”

This would come as the greatest news to emerge from Old Trafford for many fans, but it does give Solskjaer more options with some testing fixtures coming up.

United need everyone fit as they challenge for a top four finish and they will hope the Champions League dream is still alive, despite losing 1-0 to Barcelona on Wednesday night.

It will be an almighty challenge at Camp Nou, but one Solskjaer will be pushing his players to face with confidence. United made history at this stadium 20-years-ago with him as a player. Can we do it again?