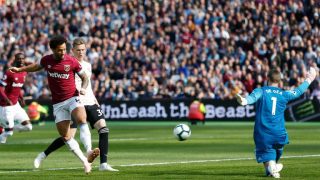 Manchester United have a huge night in Barcelona next week but they can’t take their eye off the job at hand. West Ham may have lost to Chelsea on Monday night, but the Reds should be concerned about themselves only.

Four defeats in five show that the honeymood period is over, although United have faced significantly difficult opponents. It’s the business end of the season and we still have a lot to play for.

For us at least, finishing in the top four takes priority. If United rebuild properly we can dream about being successful in Europe again, but let’s sort the bread and butter first.

But we have beaten West Ham 65 times in the past and should be making that 66 this weekend.

The last time the Hammers won at Old Trafford came on the final day of the 2006/07 season, and it would be a huge dint to our top four hopes if another surprise of that nature occurs.

Manuel Pellegrini is also on the lookout for a reaction from his players. They know United haven’t got the same confidence after their recent blip and will fancy their chances of causing an upset at Old Trafford.

Pellegrini spoke about Solskjaer and United at his press conference on Thursday, as quoted by the official West Ham website.

“When Ole Gunnar Solskjær took over at Manchester United he started managing a team in a difficult moment, but they have some very good players and have taken some good results.

“If you are not inside a team then you can’t know what happened before compared to what is happening now, but they have a good squad. Manchester United is always a difficult game when playing away and I think, if we beat them, it will be a good performance from our players.”

In attack, they have players who can hurt any side and Ole Gunnar Solskjaer is without any of his preferred full-backs. Luke Shaw and Ashley Young are both suspended.

I think United will get back to winning ways this weekend. Anthony Martial has yet to put in a big performance since signing his new deal, so we’re expecting a solid display from the Frenchman tomorrow. Lots of eyes on Declan Rice against a midfield dealing with several injuries.