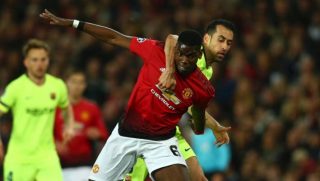 Paul Pogba was asked about a potential move to Real Madrid after Manchester United were beaten by Barcelona in the first leg of their quarter-final tie.

United were beaten 1-0 by the La Liga champions at Old Trafford, but by no means were outclassed by the Catalan side.

Pogba played well but couldn’t do enough to influence the game in United’s favour.

He previously stated that it would be a “dream” to play for Real Madrid, and it is believed that manager Zinedine Zidane is willing to make that happen.

The Frenchman didn’t give away a lot when asked about his future following United’s defeat at Old Trafford.

Speaking after the match, Pogba told El Chiringuito TV: “When we play the Champions League it’s always nice to play against Barca, it’s a dream for anyone.”

Pushed on his future in a United shirt, he added: “I won’t answer that. I will only speak about the game, nothing else.”

Pogba is not being drawn on transfer speculation which is exactly what happened the last time he went on international duty.

It wasn’t the greatest display by Pogba but he still showed glimpses of brilliance in the first half. Though with Sergio Busquets on a yellow card and deserving of a red, Pogba should be driving at players under pressure more often.

Ole Gunnar Solskjaer needs to decide whether to keep or sell Pogba this summer. The last thing he needs next season is a distracted player preferring he was in Madrid.