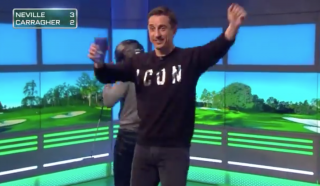 The former Manchester United captain says Liverpool’s dreams are going to “fall apart right in front of my little eyes.”

Liverpool have played one more game than Manchester City but sit in first place while the blues breath down their necks.

The title race is likely to go down to the wire at this stage, with both teams winning each week, though there is a Manchester derby coming up that could shake things up a little.

Neville, like many of us, is hopeful Liverpool will slip up in the next few weeks.

On Thursday he took part in The Grand Slam Challenge on Sky Sports with colleague Carragher to launch the start of The Masters.

The pair were tasked with putting balls with golf clubs, their feet, and cricket bats while wearing helmets. Neville came out of the challenge victorious and made sure to throw in a few anti-Liverpool digs.

“This is exactly what’s going to happen to Liverpool at the end of the season,” said Neville.

“The bottle, the nerve, it’s all going to kick in and fall apart right in front of my little eyes.”

Neville can’t help himself when Carragher missed his put, adding: “There you go! Near misses!

“Hit the post, hit the bar, the referee cost us, the helmet was too big. The excuses will be coming out.”

Carragher then misses another putt, to which Neville concludes: “Last minute, Mo Salah running through on goal, losing 1-0 against Chelsea, Eden Hazard has scored, here he is, Mo.”

As #TheMasters gets underway today, we put @Carra23 and @GNev2 up against each other in The Grand Slam Challenge! ⛳

It will be an extra-long summer for United fans if Liverpool manage to win anything this season.