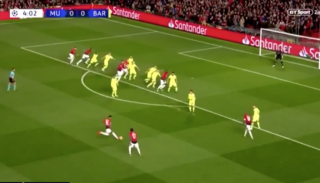 The Reds are currently trailing 1-0 after VAR intervened and gave a goal that was initially ruled out for offside, scored by Luis Suarez.

Barcelona still look threatened of Rashford’s pace on the counter-attack and United will try make use of that throughout the game. The England international partners Romelu Lukaku up front and both need to be clinical in front of goal.

Anyhow, Rashford has had the best chance yet from a dangerous free-kick. Sergio Busquets escaped a booking for a high and late challenge on McTominay.

Rashford stood up and struck with swerving power. The ball went just wide but more attempts like this could put United back with a chance of taking something from the first leg tonight.

Watch the free-kick below.