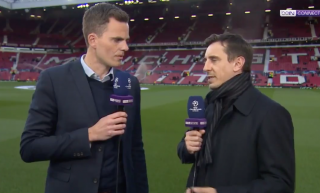 We’re under an hour away from kick-off and the nerves are really beginning to kick in.

The team has been confirmed now everyone is having their say on how they think Manchester United should or will approach the game.

Speaking to beIN SPORT ahead of the match, Gary Neville noted how Ander Herrera’s absence could prove to be a blow for United. Although the Spaniard is being strongly linked with a move to PSG, he does offer a level of energy that none of the rest of midfielders can and that could have helped United against a possession-based side like Barcelona.

Winning the ball back against Barça is never going to be an easy task, so we will need to have Fred, Scott McTominay and Paul Pogba at the top of their game.

Neville also says this is a bonus game for United because nobody anticipated the Reds making it this far. Now facing Barcelona, it would take something special for Solskjaer’s men to progress.

There’s some insight for the full-backs tonight too.