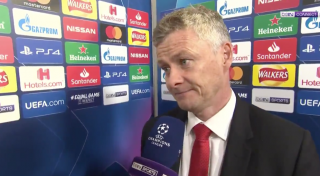 Ole Gunnar Solskjaer will have to rely on another miraculous European away performance for Manchester United to progress in the Champions League after his spirited side lost 1-0 to Barcelona in the quarter-final first leg at Old Trafford.

Barcelona’s narrow advantage to take to the Nou Camp next week came courtesy of Luis Suarez in the early stages, who headed in Lionel Messi’s cross for the only goal of the evening. The goal was correctly overturned by VAR after being initially disallowed for offside.

The home side’s best opportunity came in the first half with Diogo Dalot failing to direct Marcus Rashford’s cross on target.

NEXT: ‘Never write us of’: McTominay remains confident after Man Utd lose first-leg to Barcelona

United competed throughout with little separating the sides in terms of chances but lacked a cutting edge in the final third, failing to register a single shot on target.

Solskjaer singled out Scott McTominay for praise after the youngster impressed in midfield in a tough test up against the likes of Sergio Busquets and Ivan Rakitic.

“Scott McTominay was fantastic. Every time he plays for us he is improving. He’s a great athlete, wins his challenges and quick on his feet. He started settling us to be fair,” Solskjaer told BT via the BBC.

“We played a good team. We know you have to defend a lot without the ball and you might be tired when you get the chance yourself. We go there with one thing in my mind, we have to score.

“We did as well as we could against Messi, kept our shape well. It could have gone both ways. I don’t think we hit the target and that’s a disappointment. We go there with work to be done but chances.

“We’re playing against a great team. It’s a tough one, we’ll go there with the knowledge we can score over there.”

Next Tuesday’s task at the Nou Camp looks daunting, but Solskjaer will take confidence from an exceptional away record and will know his side have climbed such mountains before during his reign as manager.

United will be without Luke Shaw for the second leg who is ruled out through suspension after receiving a yellow card for a first-half foul on Lionel Messi.

Check out Solskjaer’s reaction below: