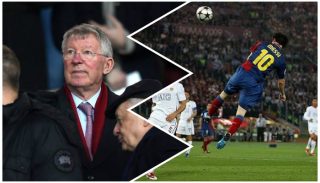 While Manchester United had little success stopping Lionel Messi in two Champions League finals, Sir Alex Ferguson later reflected on the games with a new method to stop their Argentine talisman, possibly the greatest footballer to walk on planet earth.

Ole Gunnar Solskjaer knows it won’t be easy tonight against Barcelona in the quarter-finals of the Champions League. He will be sure to warn his players that they have a backs-against-the-wall job on the cards tonight, as well as being clinical enough in the final third.

When it comes to scoring goals at the other end, Messi doesn’t need a second invite.

NEXT: Man Utd back in the hunt for Tottenham star Toby Alderweireld

Wednesday night’s game is the first encounter between the two sides since the 2011 Champions League final, which brought a happier outcome to Barcelona and we never had any complaints about that. They were by far the better team.

Messi ran the show that night and every Red watching tonight will be hoping for a way to stop him. In other words, hoping for a miracle…

Ferguson suggested after the 3-1 defeat at Wembley in 2011 that he had worked out how to stop Messi.

“You need centre-backs who are prepared to drop right on top of Messi and not worry about what is happening behind them,” the Scot wrote in his 2013 autobiography, as cited by The Mirror.

“He will drift away to the side. That’s fine. He’s less of a threat on the side than he is through the centre.

“After the inquest I told myself: ‘When we play Barcelona next time in a Champions League final, I would have Jones and Smalling, or Smalling and Evans, right on top of Messi. I wasn’t going to let him torture us again.”

Messi is enjoying another memorable campaign in a Barcelona shirt, with Blaugrana on the verge of winning the treble this season, granted they progress in the Champions League and go all the way.

He has 6 goals in 10 Champions League games, so yeah, it might be worth keeping an eye on Messi tonight.

Stopping Messi is obviously easier said than done. I don’t want to draw comparisons with Cristiano Ronaldo, as I find it boring, but winning the Champions League is a possibility every season when they’re in your team.

No matter how well United do tonight, it only takes Messi a split second to turn a game on its head.