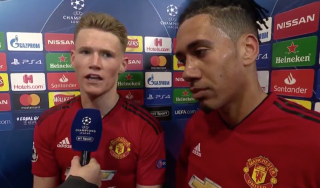 Scott McTominay is still confident Manchester United can progress to the Champions League semi-finals, despite losing the opening leg 1-0  at Old Trafford.

Barcelona take a narrow advantage into Tuesday’s second leg at the Camp Nou, after Luis Suarez’ header deflected off Luke Shaw into the net. The goal was initially ruled out by VAR for offside but was correctly overturned.

McTominay was one of United’s standout performers on the night, aggressive and assertive in midfield and not overawed by Barcelona’s Ivan Rakitic and Sergio Busquets.

NEXT: Player Ratings: Man Utd 0-1 Barcelona – McTominay continues to come of age, Lindelof leader at the back

The Scottish midfielder recognised United will have to be more potent in attack in the second leg to have a chance of progression.

“In the first 10 minutes we showed them far too much respect but after that we adapted really well and looked the better side. It was an entertaining night to watch on the TV,” he told BT Sport via BBC.

“Barcelona are top class, it’s difficult to get the ball. It’s not as easy as going out to press like mayhem.

“We have to do more in front of goal, score more goals. It’s a big second leg to go. It’s only half time. We are Manchester United and you can never write us off.”

United failed to register a single shot on target in the 90 minutes and will need to be more decisive in attack to have a chance of replicating their miraculous second leg against PSG in Paris.

See McTominay and Chris Smalling’s reaction to the defeat below: