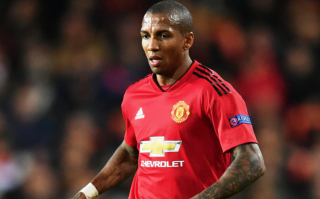 Luis Suarez’ VAR reviewed goal separates the two sides, in an entertaining contest where both sides have had openings to score. United have David De Gea to thank for a world-class save to prevent Philippe Coutinho from doubling the Catalan giants’ lead.

The home side’s best chance fell to Diogo Dalot following Marcus Rashford’s cross but the Portuguese youngster could not connect with a header from close range.

But it is one player in particular fans are not happy with so far; Ole Gunnar Solskjaer’s captain, Ashley Young.

Young has come under heavy criticism for several poor touches in possession and has in truth been extremely poor, responsible for the breakdown of numerous United attacks.

Check out some reaction to Young’s performance below:

Ashley Young is one of the worst players in the PL our right hand side is a graveyard 🤣 Otherwise decent half! #MUNBAR

A reminder that Manchester United have Ashley Young as their captain today. And they're letting Ander Herrera leave on a free transfer at the end of the season. #mufc

Poor start but united grew into the game. In a system relying so heavily on full backs we have possibly the worst in Ashley Young. He has been our downfall. Upgrade needed in the summer #mufc #MUNBAR

Ashley Young earns one hundred and twenty THOUSAND POUNDS a week to play football. Let that sink in.

Someone should tell Solskjaer that Ashley Young is terrible at football

I don't care if he's making tea, doing laundry. Ashley Young better not start games for this club from next season onwards.

For the love of god bring off Ashley Young, put Dalot at right-back and bring on Martial who would cause their back line a lot of trouble, they look shaky at the back.