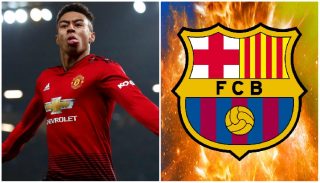 Jesse Lingard has urged his Manchester United teammates not to fear Barcelona when the welcome the La Liga champions to Old Trafford tonight.

In what is an eagerly anticipated Champions League quarter-final, the biggest tie of the round, United have been handed the task of beating one of the best teams in Europe. A similar feat to what they achieved in the last 16 against Paris Saint-Germain.

Mountains are there to be climbed, and Ole Gunnar Solskjaer made those beliefs clear before United’s memorable night in Paris from the last round of fixtures.

NEXT: Barça fan Q&A ahead of Man Utd clash: Quest to conquer Europe, life after Messi and how Reds can hurt Barcelona

Lingard, who refuses to consider United underdogs for the tie, has hit back at claims United are in for a hammering against Barcelona. It’s a common view among rival supporters on social media.

”I think that is where sometimes we might have lacked a little bit – in belief and confidence to think we can win this game,” Lingard told United Review. “We’ve done it in the past, beaten good teams in the past, so I think, going into every game, we should be 100 per cent confident of winning.

“We’ve got to believe. We’ve got to have that faith we can go even further and as far as we can in the competition.

“Anything is possible. We’ve got to believe. We have that self-confidence to go out and win games.”

We’re off to an instant loss if our players aren’t confident they can do a job against Barcelona. Tonight is a big night for the club and we need everybody at the top of their game.

United need to somehow try to keep Barcelona out and go into the second leg without conceding an away goal. That’s an almighty task, but nobody gave the Reds a chance to overturn the tie on PSG’s head which they did with a late penalty from Marcus Rashford.

Rashford trained for part of yesterday’s session alone but later linked up with his teammates. He’s a player who could hurt Barcelona on the counter-attack with his pace, so we’ll need him at his best.