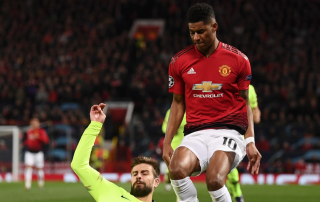 Not the result we wanted but the overall performance tonight or Barcelona’s lack of should give Manchester United encouragement ahead of the second leg.

Although it’s a blow not to score and to concede an away goal, United are by no means out of this tie.

It’s four defeats for Ole Gunnar Solskjaer in the last five games but we shouldn’t be too harsh on the lads after losing to a side as strong as Barcelona.

NEXT: Man Utd back in the hunt for Tottenham star Toby Alderweireld

They were there for the taking tonight but the Reds weren’t efficient enough in the final third.

United head into the second leg at Camp Nou with a two-goal deficit.

The tweets below show how a number of United fans reacted on Twitter.

Solskjær, again, has learnt a lot about United's fitness levels. They can sustain the high press for a matter of 10-15 minutes and then they need to relax for 5. Today, they sustained it for 25-30 minutes without a goal. Barcelona took over and just controlled the ball after.

All in all, not a bad performance but a shame about that own goal. We need more creativity in the next match. We did well to stifle them tonight though. Ole did say we’d still be in it when we play the 2nd leg! Anything is possible! 👹🙏🏼

Still in the tie, but lacked star quality tonight. No shots on target tells its own story. Our final third play was very poor indeed. Barca there for the taking but we couldn’t manage it. Just hope there’s a special night in store next week.

Manchester United should've and could've scored tonight. If they had a right back who could cross, they would have. So, so frustrating.

FT: United 0-1 Barcelona. Barca score a crucial away goal in a game that United dominated for large parts. Means that United will need to score at least once in Spain.

Uncharacteristic of Barcelona to be so sloppy on ball, at times they just didn't look comfortable offensively, and United could easily defend the space between midfield and defence. Fred deserves a lot of credit for hounding Barcelona away centrally.

Obviously disappointed with the result but the same can’t be said with the performance. Thought we were really unlucky tonight. Was always going to be difficult when you only had 10 players on the pitch. Plenty of positives to take from that. Up the reds. 🔴

Thought we’d get battered tonight. But we held our own and they beat us with an own goal. Bring on the Nou Camp 😎

Highlights the need for a proper RB , RW, another goal scoring option and that’s all knowing a world class CB is needed. Hopefully Fred and McTom can really push on now and solidify the midfield .

Honestly I feared worse, thought McTominay and Fred had superb games, sadly Pogba was poor again as was Rashford. All in all, not too disappointed.