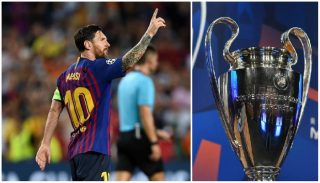 We caught up with football journalist Rafael Hernandez, also known as @RafaelH117 on Twitter, to gather some insight into Barcelona ahead of Manchester United’s Champions League quarter-final first leg at Old Trafford on Wednesday night.

This is a matchup of two footballing giants in the biggest football tournament around. It doesn’t get much better than this, but United go into the game as underdogs.

That won’t come as a surprise to anyone considering where Ole Gunnar Solskjaer picked up us from prior to the new year. A lot of progress has been made but beating Barcelona over two legs is a big ask.

Here’s what Rafael thinks about Barcelona this season, speculation surrounding Paul Pogba and Ivan Rakitic, and life without the great Lionel Messi.

Hi Rafael. I’m sure you will understand our concerns coming up against a side with Lionel Messi, but does this Barcelona side have many flaws?

I wouldn’t say Barcelona have many flaws at this point in the season, Messi usually covers them up by turning the incredible into mundane every match, but the right side has been the clearest problem for Valverde. He usually favors Sergi Roberto ahead of Semedo in the toughest encounters, but both have trouble covering the right side completely and have a mistake or two in them,, which usually demand more from the midfield from covering the gaps left when going forward.

Tell us a bit about Barça’s Champions League campaign so far.

The club hasn’t done well in the competition after winning it in 2015, and the shock result vs Roma led to a massive change in the squad’s mentality. The competition turned it into an obsession and the main focus for the players, who spoke frequently about the Champions League being the priority this season. The group stage showed a clear change of attitude and intensity, and it translated well on pitch. This is without a doubt the best Barcelona’s played in Europe post treble.

You must have enjoyed watching Real Madrid crumble this season. How can Barça avoid such a sticky situation after Messi calls it a day?

I am not sure Barcelona can avoid it at all, partially because the gap Messi leaves will the kind we have rarely seen in the history of the sport. It’s apt to compare it with Sir Alex Ferguson’s departure from Manchester United. You can’t simply keep going and winning after the most important person in the club’s history departs, no matter how well you plan. The board is finally making shrewd long term signings like Ter Stegen, Arthur, De Jong, Lenglet, Dembélé, and La Masia can provide important midfielders like Alena and Riqui Puig once again. The future after Messi will be tough, physically he has declined, but technically he’s get even better, now more of an attacking midfielder than a forward while his precision in front of goal has been excellent. Reckon he still has at least five seasons ahead.

People who read your tweets will be aware of your views on Valverde and previous managers. Your dislike for Mourinho is often clear. If it was up to you, who would manage Barcelona and why?

Valverde has shown in the past to be afraid of losing rather than going for the win, and that’s something few Barça fans would stand for considering the quality of the squad and the presence of Messi. The Roma debacle was a direct consequence, and it left a black mark on his first season even with the double. Still, he’s outstanding when adjusting midway through matches and the players are quite fond of him, so I have my issues with him, but no harm recognizing the good he’s done.

I was completely against him renewing for another two seasons though, it was time for a change this summer, especially considering De Jong’s coming, Arthur is on the rise, and a more proactive manager like Quique Setien could transform this team into playing a more aesthetic kind of football.

Talk of Barcelona going for Paul Pogba has cooled since last year, with Real Madrid now favourites if he was to leave Old Trafford. Do you think Pogba would do better at Barça than he has at United?

If he had joined last summer as Barcelona attempted in the final weeks of the window, things would’ve been very different for the club and Manchester United. Arthur wouldn’t have been given as many chances, probably not consolidated himself as a starter, Coutinho would have even more problems getting into the starting eleven, and I am not sure Pogba would’ve done that well. He’s versatile and incredibly able, but he’s a player on the same mould of Coutinho, needing a lot of freedom, and Valverde favors a more rigid type of midfield. I wouldn’t bet against the Frenchman causing yet another headache for the manager like the Brazilian’s done.

We’ve been linked with a move for Rakitic. Rubbish or think there’s anything in those rumours?

Apparently Manchester United tried to persuade the Croat before he renewed his contract with Barcelona, but it was more of his agent looking for opportunities elsewhere in case the club didn’t match with his demands. This summer will be big for both clubs and it might be possible that Rakitic will be put up for sale, and the links might return.

What are you expecting from United in the first leg?

The weeks leading to the first of the two matches for Manchester United have been a lot more trying, the defeats putting Ole and the players in a bind for a Champions League spot. I think we will see a counter-attacking setup, hoping to explore Barça’s gaps especially on the right side, with the speed from Martial and Rashford.

Immediately after the draw, I thought the two matches were going to be a lot tougher than they’re likely to be right now. Messi’s on the best form of the season, starving for another Champions League title, and all of the players are peaking at the right time. I’m going for a 1:0 win at Old Trafford.