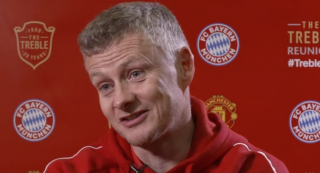 Ole Gunnar Solskjaer hopes to replicate the spirit of Manchester United’s treble-winning season to take the club back to the top.

That is Solskjaer’s job now, fittingly since it was his iconic injury-time winner in the Champions League final that contributed to treble in 1999, won under Sir Alex Ferguson.

Now as United manager, he intends to build his team around the principles that worked so well with the treble winning side 20 years ago. And it will take some work for Solskjaer to build a side capable of going all the way in Europe again.

Solskjaer told ESPN: “We challenged each other every day in training. There were fights and there was an inner justice that I’ve not seen in too many teams.

“We never, ever accepted anyone being below par in training. We kicked each other and we had to win every single day. That moved over into games and we never gave in. There was an unbelievable team spirit.

“We had something special. It’s a different group now and the challenge is, ‘How can I make these players winners as we were?”

With everyone supposedly kicking lumps out of each other, I guess most wanted to be on Roy Keane’s team more often than not…

However, United are currently sixth in the Premier League and still have a lot of work to do in order to qualify for next season’s Champions League. They could, of course, just go out and win this year’s competition outright but the Reds must beat Barcelona in the quarter-finals first.

That won’t be easy. Barcelona are still a great side with Lionel Messi pulling all of the strings. If you saw Eden Hazard’s first goal against West Ham on Monday night, that is exactly what I fear he will do to us…

“We’re playing against a good team but there is something special about this group of players,” Solskjaer added.“It will be fantastic.”

Nobody gave United much of a chance against PSG in the last round and look how that turned out.

Anything is possible if our lads get going, but Barcelona will pick you apart with the slightest lapse of concentration. We need to do our jobs defensively and take our chances when they come.