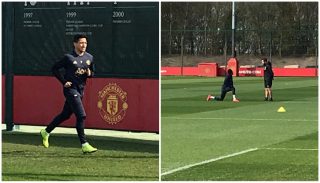 Manchester United take on Barcelona in the quarter-finals of the Champions League on Wednesday night.

On Tuesday morning, the club invited the press to open training and Manchester Evening News reporter Samuel Luckhurst was there to provide updates, as well as some photos.

He noted how Alexis Sanchez had returned to training but that Marcus Rashford was training alone, presumably a precaution.

Sanchez had been home in Chile recovering from an injury but it looks like he could be in contention to feature against his former club Barcelona in the Champions League. That will surely demand on his fitness, but it’s potentially another option for Ole Gunnar Solskjaer to work with.

Solskjaer will address the media at his press conference later today. He is expected to give an update on the squad.