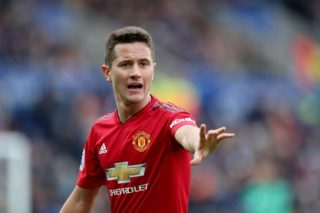 Ander Herrera gave an interview to ABC where he comments on his contractual situation at Manchester United. The interview itself was brought to our attention by Sport Witness, who translated the best parts.

It’s never ideal to lose one of your starting players, but as explained yesterday in an editorial, the club would be mad to give into Herrera’s reported demands of £200,000-a-week.

He makes it clear in the interview that there has been no agreement found between him and Manchester United, but that he will continue listening to the club as well as interest from elsewhere.

“It’s true that I only have two months on my contract left, and today, Manchester (United) and I aren’t thinking the same and there is no renewal agreement, but my duty is to keep listening to United.

“What I have clear is that I’m going to continue playing in a big team… I will listen to United, of course, but also to other clubs. I do not close doors.”

Unless United offer more money, it looks like Herrera will be packing his bags this summer and moving on to another club.

With quotes from the interview doing the rounds on social media, United fans were quick to respond on Twitter. Check out what they had to say below.

After years of playing utter shit under Mourinho & LVG, Ander Herrera gets it right one season under Ole and he thinks the club owes him the world. If he wants out, I’m personally offering my back to carry his damn bags.

Who does Ander Herrera think he is?

He only started playing to somewhat acceptable level for the first time in a while since Ole took over. Not good enough to get what he wants.

You can blame the dog walker wages for players wanting more money, but we could be looking at the likes of Neves. We need players in there who can ensure we dominate possession. They don’t have to be mega expensive players. Wolves midfielders are a perfect example of that…

This is a result of the Sanchez deal. Players will look for more now. In my eyes Herrera is an important squad member. He doesn’t let us down and he should be given a new deal. He may not be a starter next year if we have a big summer but he does a job and I’d love to keep him

Ole needs to get ruthless with the squad, and just being a good guy isn’t enough. I love the guy, but would rather see McTominay, Fred or a youngster for the rest of the season, and a replacement in the summer. But i blame Ed for this. Should have been dealt with long ago.

Time for an upgrade.