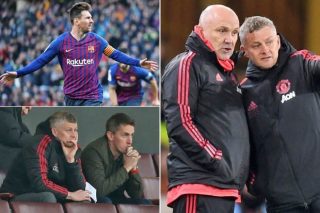 The Reds host Barcelona in the Champions League on Wednesday night.

Even though some might claim United have the home advantage, Barça are favourites going into the tie and deserve to be. They’re bound to be favourites against most teams left in the tournament with Lionel Messi still running the show.

Writing in his column for The Sun, Newcastle legend Alan Shearer gave his thoughts on the game between United and Barcelona, stating that you cannot dismiss the Reds after the memorable comeback win against Paris Saint-Germain in the last round.

Shearer does express his concerns about Barcelona talisman Messi, but there’s nothing we can do about that only hope that everyone plays at the top of their game.

“You cannot write off Manchester United after the way they fought back to beat Paris Saint-Germain. But I just think Barcelona will have too much for them over two games — mainly because of that guy Lionel Messi.

“I expect it will be Messi who makes the difference against United and he is the reason I think Barca will perhaps go on to win the whole thing.

“United and Ole Gunnar Solskjaer deserve this crack against Barca because of what they did in Paris. But I just think it will be a step too far for them.”

Ole Gunnar Solskjaer and Mike Phelan were in Barcelona over the weekend watching United’s upcoming opponents beat Atletico Madrid 2-0 at Camp Nou. We can only hope they’ve come up with something to stop Messi and co, although that is a gigantic ask.

This is the level we as United fans crave to be at… Latter rounds of Europe’s most prestigious tournament against the likes of Barcelona!

This one is only asking for another special night in United’s history.